This was Teas third visit to Turku and Parainen, the urban centre and edge of the archipelago. While scouting for boats and taxidermied animals for Teas new work we fell into the 'lunarlandscape' of the limestone quarry shining in the vast whiteness of the wintery archipelago. We discussed the challenge to make art in these perfectly beautiful surroundings. 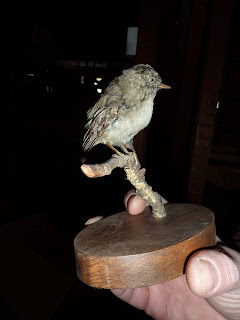 Some highlights of the trip:

The Biological Museum of Turku which is located in the fun part of the city and really worth a visit for its amazing national romantic wood architecture and beautifully constructed dioramas of finnish nature.

Kalakauppa, a fish shop and restaurant in the centre of Parainen.

The most amazing part of the trip was the sunny side of winter that people were enjoying while fishing and doing sports on the frozen sea.
Posted by CAA-Contemporary Art Archipelago at Thursday, March 03, 2011 0 comments

The artists collected future visions from the archipelago residents and organised three workshops for the locals in Korpo, Utö and Houtskär in January 2011. The scenarios are now being turned into scripts for short films in the blog: http://contemporaryartarchipelago.fi/scifi/

During Spring 2011 we will film the fantasies with the locals as actors. The films will capture scenarios that combine the thoughts, fear and wishes of many archipelago residents. The first filming will take place in May.

On their second visit to the archipelago the light of early summer was replaced by the darkness of rainy November. The arrival was also rather different – this time on the cruise ship from Stockholm amongst crowds of partying youngsters. We met Katja Bonnevier again and the discussion centred on the meadows and the need of more sheep on the islands to graze and thus naturally care for the landscape and its biodiversity.  The focus on local food production continued over lunch at the Korpo’s local pub Hjalmar’s. We shared Hotel Nestor with workmen from the construction site of a huge new green house nearby, soon to bring light to the dark winter.
With the marine biologist Christoffer Boström at Korpoström Nomeda and Gediminas got further insight into what is going on under the surface of the sea. We pondered upon different technological solutions on how to bring this closer to people moving above it. The artist Antonia Ringbom joined us on planning possible collaborations between scientists and artists on workshops for school and other groups during the next summer’s exhibition. We agreed on the importance of these processes of exchange across disciplines – as sites of transformation that need to be recognised and valued in themselves, beyond their tangible products! Another wonderfully inspiring visit to Antonia’s home and animation studio was followed by a walk in the dark through rain and a much needed Friday evening sauna.
Before leaving Turku through the archipelago on the aptly named Silja Europa ship, Nomeda and Gediminas followed up a chance encounter from their last visit: engineer Kaj Kivinen told them about early experiments with internet on the remote island of Utö by the military.
Posted by CAA-Contemporary Art Archipelago at Saturday, November 27, 2010 0 comments


After the discussion on Economy in Korpoström Dinko Peracic and Miranda Veljacic continued their long weekend in the archipelago. We took the five hour journey, in the darkness of the Autumn evening, to Utö and experienced the commuter boat at its busiest. The last weekend on the islands for many visitors and part-time residents before the quiet winter season.
As members of the Croatian architect collective Platforma 9.81 Dinko and Miranda were here interested particularly in the built environment, its development, conventions and regulations. For example, the private ownership of waters and shores was in stark contrast to Croatian coast. With an insight into the Croatian islands and what they termed the logic of archipelago, they found tourism to be a big topic in the discussions about the future of Turku archipelago while in practice it still appeared very small scale. Yet in the misty November landscape of Utö, with only a handful of bird watchers around, it was hard to imagine 500 people on the small island during the height of the summer. The intense high season of only 6 weeks has its benefits both for the locals and the off-season visitors.
Hanna Kovanen guided us in the lighthouse again, while her mother Solveig treated us to an unbeatable fish soup and pancake lunch and her father Topi served us coffee at Hanna’s café. The chair of the island association Mats Bergman was luckily home this weekend and took Dinko and Miranda around the museum and other buildings the association takes care of and continues to develop. Mats also kept us company on the long journey back on Sunday through the grey and foggy seas. But before departure we managed to test the most southern indoor swimming pool in Finland, in the 70’s built military base turned hotel.
The artist Sussi Henrikson and Johan Skibdahl of Lanterna in Nagu presented their personal take on tourism on this so-called party island of the archipelago. Katja Bonnevier (Biosphere Reserve) gave Miranda and Dinko an overview of the ecological issues of the area before their discussion with Katriina Siivonen (future researcher) at the CAA lecture series at Turku University and a very speedy tour of Turku.
Posted by CAA-Contemporary Art Archipelago at Friday, October 29, 2010 0 comments

Tellervo and Oliver presented their practice in an artist talk at CAA lecture series in Turku University. They continued to another visit to the islands, beginning to collect material for their project on science fiction archipelago. They interviewed a number of locals in a few days across the islands, from Korpo and Houtskär to Aspö, about their fears and dreams for the archipelago – imagining what it could possibly be like in one hundred years: a paradise of simple quality living, all dressed in woollen flying suits, or a gated community for the rich where the majority language is English or German, perhaps inhabiting huge skyscrapers on tiny isles. Or, perhaps nothing much changes after all.
Posted by CAA-Contemporary Art Archipelago at Sunday, October 10, 2010 0 comments

Arja took part in a cross-disciplinary discussion with Katja Bonnevier (Biosphere Reserve) on the topic of sustainable fishing at the CAA lecture series in Turku University. This launched her research for the art project on local food for CAA, the complex situation of fishing as a starting point: why is there no longer much fish in the area, or why are we not eating the fish there are still plenty or even increasing amounts of?
On a quick first visit to the islands we checked out a number of restaurants that were nearly all closed, out of season. And in the end we run out of time to taste pizza with wild local chantarelle mushrooms in the Korpo pub and restaurant Hjalmar’s. Alongside the question of fishing, we discovered a wealth of issues to do with other local food production, in particular on our drive around the island of Wattkast in Korpo. Huge greenhouses are currently being built there, while we visited next door the farm of Thomas Johansson and Johanna Franzen. They shared their experiences and insight of running and developing their farm of up to two hundred beef cattle and hundred sheep. The animals spend their summers taking care of the landscape and its biodiversity on the outer islands, for example on Aspö.
Posted by CAA-Contemporary Art Archipelago at Monday, October 04, 2010 0 comments

CAA-Contemporary Art Archipelago
brings to Turku Archipelago over 20 new site-specific art works and events by international and local artists during the summer 2011.